I’ve never been a fan of celebrity crushes. Putting someone on a pedestal so often leads to disappointment when they turn out to by human after all. But I have to admit to a star-like crush on vulnerability researcher extraordinaire, Dr Brené Brown. With this in mind I parted with some big bucks to attend a business breakfast this month, hosting my all-time favourite TED luminary.

This was no dry, academic presentation. As her TED talks (viewed by millions around the world) predicted, she’s a lively speaker and vivid storyteller. The hour was peppered with hilarious tales of her own vulnerability, which were easy to relate to. Perhaps that’s why it’s impossible to knock her off a pedestal, as she does it amply herself with no disingenuousness.

“Daring greatly and being vulnerable is about showing up and feeling we are enough.”

Daring Greatly, Dr Brown’s latest book, further explores her thesis of how finding the courage to be vulnerable can transform our life.

The title of the book references a quote by Theodore Roosevelt, from his 1910 speech The Man in the Arena:

“It is not the critic who counts; not the man who points out how the strong man stumbles, or where the doer of deeds could have done them better. The credit belongs to the man who is actually in the arena, whose face is marred by dust and sweat and blood; who strives valiantly; who errs, who comes short again and again, because there is no effort without error and shortcoming; but who does actually strive to do the deeds; who knows great enthusiasms, the great devotions; who spends himself in a worthy cause; who at the best knows in the end the triumph of high achievement, and who at the worst, if he fails, at least fails while daring greatly, so that his place shall never be with those cold and timid souls who neither know victory nor defeat.”

The arena is just a metaphor for life. Dr Brown would describe Roosevelt’s man marred by dust and sweat as someone who chooses to ‘show up and be seen’, rather than being an armchair critic in the cheap seats. In her Texan drawl she asserted, “If you’re going to go into the arena, you’re going to get your ass kicked.” She counselled that when you stand up for what you believe in, you can choose comfort or courage but you can’t have both. While there may be comfort in playing it safe, the outcome is rarely courageous or authentic.

This message differs from one often delivered by traditional motivational speakers on business or personal growth. Far from “feel the fear and do it anyway” or “have faith in the universe”, Dr Brown acknowledges the pain that comes with exposing your vulnerability is often a consequence of such authenticity.

Vulnerability isn’t weakness, it’s our most accurate measure of courage.

Regardless of whether our vulnerability is triggered by dating someone new, starting a difficult conversation with a loved one or leading a multimillion-dollar company, entering the arena takes courage.

“If you’re going to go into the arena you need to have clarity of values and someone who loves you, not despite of, but because of your vulnerability.”

So the question isn’t whether you do vulnerability or not. If you’re alive, according to Dr Brown, you’re doing it in vulnerability. The question is what are you doing with it? According to her research, not being conscious of our vulnerability means we are likely to numb ourselves (such as with food or drugs) or behave in other ways that drive people away us.

The talk concluded with a powerful message. We were asked, “What’s worth doing even if I fail?” I’m sure that question alone caused a ripple effect across the country, as 800 women left the breakfast and stepped out into the world to dare greatly.

TED talks on vulnerability and shame. 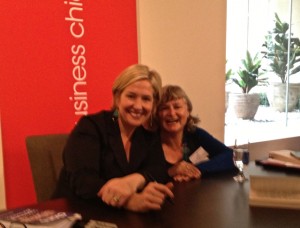