So screamed the headline!

Fish is good for us, isn’t it? It’s full of the best type of oils for the cardiovascular system, joints and brain. So, what’s the problem?

It’s doesn’t take much sleuthing to explain the varied results.  It’s our farming, not the fish that are muddying the water.

The problem with salmon

Salmon, trout and barramundi are some of the most widely farmed fish in Australia. They arrive to the consumer gutted, boned and sometimes skinned, frozen into standard portion sizes. Just thaw and cook. What could be easier?

Of all fish, salmon is the most highly consumed seafood in this country and often it’s the only fishy option on the menu, when dining out.

Salmon has long been touted as having one of seafood’s most healthful fatty acid profiles. However farmed salmon shares little with its wild relatives. If you’ve tasted the real thing, what we eat here is more orange in colour (due to natural dyes in the feed) with a milder flavour but a fatty aftertaste more like animal protein.

Farm-raised fish is fed high protein food pellets, which vary in content and quality. The pellets tend to be mostly plant-based (predominantly soy), while some may be enriched with fish oils. But once consumed by the fish, their flesh usually has higher levels of saturated fats (like land animals) and a different nutritional profile than wild varieties.

While there’s conflicting evidence regarding contaminants like PCBs and dioxins in farmed versus wild fish, there’s growing controversy about the environmental impacts of the aquaculture itself.

From a naturopathic perspective, it’s a no brainer that the environment our food is grown in, will impact their nutrient profile.

However nutritional data often relies on old studies, usually from wild grown seafood. The fats in wild salmon, where the most positive health effects are derived from, are different to those farmed in modern aquaculture. As many of us now predominantly eat farmed seafood, it’s no wonder there is decreasing evidence for salmon’s heart protective properties.

Should you eat fish?

Seafood, is great source of protein. Most people find it easier to digest than meat. Though not everyone likes the fishy smell or aftertaste.

The official medical advice regarding eating farmed fish, even at more frequently than the standard two serves a week, generally recommend that the ‘benefits outweigh the potential risks.

Keep in mind that the large meta study, alluded to in the “lots of grey” article  still found that eating fish afforded some cardiovascular protection. 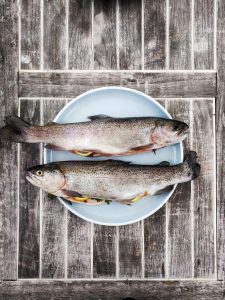 Photo by Gregor Moser on Unsplash

Unfortunately, seafood like prawns, scallops, soft shell crab and oysters are also farmed and may have similar environmental issues. While most frozen fish fillets (and fish fingers) found in the supermarket, though convenient, are made from white fish that have very little of the heart-health oils. These prepared products are usually lower in protein, higher in salt and saturated fats.

Some healthier seafood strategies include: 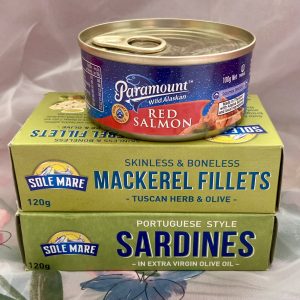 Think outside the (salmon) box! Try these simple techniques, using other types of fish.

The recipe archive has lots of simple fishy or vegan ideas.