Can a single diet cure depression, lower cholesterol and help you live longer?

As the saying goes, everything old is new again. The Mediterranean diet, with its focus on plant foods, fish and olive oil, hit the headlines a couple of decades ago when studies found that countries like Italy, Spain and Greece had a lower incidence of heart disease, compared to their northern European neighbours.

While many popular diets are just fads, the Mediterranean diet may be the only one that has lasted. Ongoing research has linked it to a longer life expectancy, as well as decreasing the risk of Parkinson’s, Alzheimer’s some cancers and other chronic diseases.

In 2016 prevention and treatment of two further health conditions were added to the diet’s success story – reducing cardiovascular risks  and depression.

The preliminary findings of a cardiovascular study triggered worldwide headlines claiming that the Mediterranean diet is “more effective in lowering cholesterol, than statin drugs”.

The study included 1,200 older people with a history of blocked arteries, stroke or heart attacks who were placed on the Mediterranean diet. While the research is yet to be published, its conclusions reinforce the positive impact of plant-focused diet on cholesterol levels and add to the increasing controversy around statins.

The second study, from Deakin University, used a version of the Mediterranean diet to reduce major depression symptoms. Though there are some limitations to the Deakin study, it reinforces a long-held naturopathic belief that a plant and fish based diet plays an important role in maintaining good mental health.

What is the Mediterranean diet?

The version of the Mediterranean diet used by most researchers is based around eating a lot of olive oil, nuts, vegetables, fresh fruits and whole grains, with a moderate amount of fish and poultry, sheep or goats milk yoghurt/cheese. Red meat is eaten occasionally, while processed meats and sweets are avoided.

Traditionally in Mediterranean countries, locally grown food is bought fresh each day and cooked from scratch. Wild fish is caught daily and often cooked (grilled or baked) whole. This wouldn’t include farmed fish like Atlantic salmon and barramundi. The wine that people consume in these regions is usually young, local red wine, which is high in antioxidants and drunk “in moderation”.

How to eat an ideal Mediterranean diet 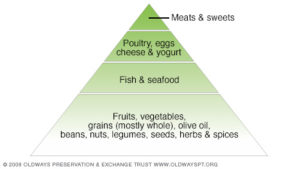 Focus on eating mostly the foods on the bottom layer of the Mayo clinic Mediterranean diet pyramid and try the following tips: 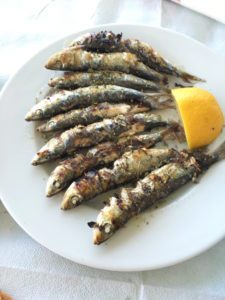 A simple meal at a Greek taverna might include freshly caught fish straight off the grill, with salad or a plate of greens or beans.

Criticisms of the Mediterranean diet studies

Perhaps a better name for the diet used by researchers is the ideal Mediterranean diet. It harks back to the days of village life and doesn’t necessarily reflect the way people from these cultures currently eat. The diet adopted for most of the studies often exclude some foods that are frequently eaten foods in the Mediterranean region. For example, processed grains (flour) are usually absent from the guidelines, yet white bread (and pasta) is a staple in these countries.

The Deakin depression study selectively recruited participants who had a pre-existing “poor” diet, excluding those who already ate a reasonable diet. The direct impact of the Mediterranean diet on mental health, rather than the mere exclusion of ‘unhealthy’ foods, is unknown.

Often people experiencing a severe depressive episode can lack motivation to shop, cook and generally eat well. It would be interesting to see if support for long-term diet change can lower the frequency or severity of depressive episodes.

Deakin University researchers created their own version of the Mediterranean diet which they call the “ModiMedDiet”. Unlike previous studies, for example the Mayo Clinic model, this diet controversially includes three to four serves of red meat a week.  The Deakin study acknowledges that the Meat and Livestock Association financially contributed to their research and has also provided other grants to the key author. While their research is still promising, this is a significant variation in the base diet used in other Mediterranean diet studies.

A diet or a lifestyle?

There are many healthy aspects to an ideal Mediterranean way of life. A plant-based diet with a liberal addition of seafood, regular physical activity and sunshine are all factors that can contribute to good mental and physical health.

While some aspects of the Mediterranean diet remain controversial, such as the inclusion of flour and red meat, the evidence is conclusive that a wide-variety of unrefined plant foods provides a keystone for healthy eating.

Update March 2017: a study of over 62,000 women aged 55 – 69 found they had a 40% reduced risk of developing one type of breast cancer. The women followed a Mediterranean diet that had been altered to exclude alcohol (a known breast cancer risk). There were fewer cases of oestrogen receptor negative cancers, a type of breast cancer that responds poorly to conventional treatment.