According to the forecasters, root to flower eating is the hot food trend of 2019. Think of it as the plant-based version of nose to tail dining. So often we use just the leaves or roots of a plant, when in most cases all parts are edible.

In the spirit of root to flower cooking, David Lebovitz’s novel use of chard stems caught my eye. It’s an easy way to use an often discarded part of this unglamorous plant. You can add other off cuts, such as a thinly sliced fennel core. The resulting pickles are quite tangy and pair well with salty or slightly oily food.

I used rice wine vinegar, as it’s not as harsh as white vinegar and still quite cheap from Asian grocery stores. The chili is optional. Omit it if you’re not a fan.

Make sure you have a clean jar and lid (a wide mouthed clip top jar is easiest to use) that’s either fresh from the dishwasher or your preferred sterilization method.

Toast mustard and fennel seeds in a small fry pan over medium to high heat. Stir frequently and remove from pan (so they don’t continue cooking) once fragrant. This only takes a couple of minutes.

Cut the chard stems to a couple of centimetres less than the height of your jar and pack the stems, toasted seeds, garlic and chili into your jar, as tightly as possible.

In a small saucepan heat the vinegar, water, sugar and salt. Stir or swirl until the sugar and salt has dissolved. Remove for heat just as it begins to boil and set aside for 5 minutes. The pickling mixture should still be hot but not boiling,when you pour into the jar.

Place your jar with stems on a clean tea towel, this both mops up any spills and reduces the chance of your jars cracking. Gently pour in the liquid to fully cover the chard, almost to the top of the jar. Lightly tap the jar, to dislodge bubbles. Screw or clip on the lid and leave on the bench until it comes to room temperature. Take the lid off, tap again to dislodge any remaining air. Top with additional pickling fluid so it goes to the top of the jar.

Store in the fridge and leave for about a week before eating. Once opened make sure  the pickles remain covered with liquid. Eat within two months.

Throw out if there’s an unpleasant odour or any sign of mould. 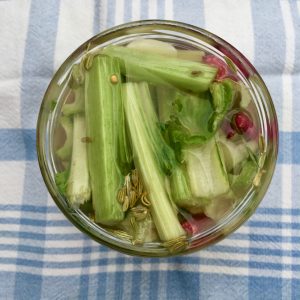 Variations: Thinly sliced fennel cores are a tasty root to flower addition. You can also pickle sliced radishes, carrots, or a mixture of vegetables instead of chard.

This recipe is vegan, gluten and dairy-free. Explore the recipe  archive for more healthy cooking inspiration.