Two years ago I wrote about what I’d learned from cancer. The things I know for sure still shine through. But what about life after cancer? Over the next couple of months I’m sharing my experience; what I’ve learned and how I can help you, if you find yourself living in the shadow of cancer, the limbo land after treatment has ended and you’re told to get on with your life.

This month I celebrate my three year “cancerversary”. With it came some amazing news. At a recent check-up, my specialist told me, “if the cancer was going to return, it would have most likely have done so by now”.

I’m aware how rare it is to get this news. Across all types and stages of ovarian cancers, the three year survival rate is 55%.  Sadly, only a very small proportion of this group is still disease-free at this time.

Life in the shadows

For me living in the shadow of cancer involves hope, love and episodes of anxiety. Being told that I’ve essentially “survived” cancer is the most incredible gift. It feels like I can finally exhale. It’s also a timely prompt to share what I’ve learned, especially about living in the grey zone after treatment is finished and deemed successful, for now.

It struck me that my surgeon and oncologist didn’t have the skills that I needed to help me recover from treatment or potentially prevent a recurrence. Not to mention the emotional cost of ongoing surveillance.

While it was a relief to have completed the months of treatment, being released back into the wild with a only a check up every so often, made me feel very vulnerable and alone at times. “Where is the team responsible for helping me stay well?” I wondered. Once the surgeon and oncologist had finished their jobs, their role seemed solely to wait to see if the cancer returned.

There was no battle, there was a disease. She was not a warrior, she was a person. When we talk about cancer in the language of war, when we anthropomorphize cancer, when we make it other than the self, we damage anyone who is living alongside someone living with/dying of cancer, but we damage those of us with cancer most of all.

That word “survivor” is one I tend to write in quotes. Most of the popular language around living with or dying from cancer is fraught. The familiar clichés of fight, battle and other aggressive words are not useful, as they reduce us to winners or losers. The analogy is disempowering and strictly speaking incorrect. It’s our body, not a foreign invader, which creates cancer cells. “Fighting” cancer implies an attack on self.

Journey: passage or progress from one stage to another.

For me, the cancer experience wasn’t a battle per se but the “journey” (for want of a better word and really I want a better one), did begin with a lot of expletives. My reaction to the diagnosis was quiet shock, followed by a very loud string of profanities the moment I was alone.

While swearing felt good, the relief was only temporary. I soon realised I needed another tactic, so I gathered a team. Beyond the hospital surgery and oncology teams, and a fantastic psychologist; friends, family and colleagues played a crucial role. Outsourcing the naturopathic side of my recovery to a trusted colleague was a no brainer. Fortunately, my old friend and colleague in the US knows more about herb/nutrient and drug interactions, than possibly anyone else in the world. Having another professional I could trust, to guide me through conventional care, and help protect me from its adverse reactions, was invaluable. It’s ironic that ethically I cannot offer the same care to my own clients, due to most Australian oncologists placing a blanket ban on taking complementary medicines concurrently with conventional treatment.

Trust and love were also important medicines. Accepting the support I was offered and letting others care for me, allowed the time I needed for rest and recovery. Submitting to the ministrations of others was a struggle at times. There’s something utterly humbling about watching your friends clean the house while you loll on the sofa.

My partner did the brunt of the work. From mopping up bodily secretions and administering injections, to being an emotional anchor. I learned what love really is. He’d shrug it off saying, “rather you than me”. There was a lot of laughter, despite the tears.

Is my “survival” the result of naturopathic or conventional treatment, or a combination of both? Surgery certainly saved my life though I remain undecided about the rest of the oncology protocol. I believe the naturopathic remedies mitigated many of the harmful side effects of chemotherapy, as well as improved my recovery from treatment. However, I strongly believe the reason I’m and alive and well today comes mostly down to luck.

When I was first diagnosed with ovarian cancer, a friend was shocked when I described myself as lucky. The type of cancer, including the subtype, stage and grade, is a bit of a lottery. While ovarian cancer generally is known for its poor survival, I had luck on my side. The subtype was one that is slow to spread and though high grade, it just scraped into 1C the top end of the lowest stage.

Perhaps my biggest stroke of luck was consulting an excellent GP, who took my symptoms seriously and referred me immediately to Emergency at The Women’s (Melbourne) for an urgent scan. The time lag between my first (and only) presentation to my doctor and diagnosis was less than four hours – that timing is incredibly rare for a woman with ovarian cancer. While there’s controversy in the medical literature about the impact of the timing, there’s significant anecdotal evidence supporting the speed of detection’s impact on outcome for any cancer.

Sometimes being “lucky” can also feel bittersweet. A huge part of the “journey” is about emotional recovery. Post-traumatic stress is a common accompaniment to life after cancer and survival guilt is a whole other ball game.

Like many of our toughest experiences, there’s nothing clean cut or entirely good or bad about it. What I do know is that experiencing an illness or trauma is nuanced. Time, and an experienced psychologist, went a long way in helping me assimilate it. 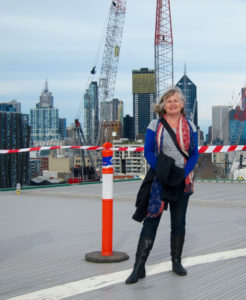 A few months before diagnosis, ironically on the hospital roof.

Please read part two: recovering from trauma (it’s not just you who feels emotionally traumatized by cancer!). Don’t miss the next installment – sign up for my free monthly newsletter.

Gill Stannard is one of Australia’s leading naturopaths, with a special interest in collaborative oncology. If you’re living in the shadow of cancer, book a Wellbeing Plan to help with your recovery.