Is it time to flick the tick?

Celebrity chef and Paleo diet fan Pete Evans is in the news again, saying its time to abolish the Heart Foundation ‘tick’. But perhaps he’s making sense this time.

Update: December 2015
I’m pleased to see 12 months on from this original post that the Heart Foundation has finally got with the program and given the tick the flick!

While I applaud Evans for encouraging his followers to cook from scratch, I’m not a huge fan of the Paleo diet. From a nutritional perspective, the energy-dense fat and protein based diet is better suited to a highly active but short caveman lifestyle, rather than the modern, sedentary kind.

But when it comes to the ‘tick’ program, I’m with Evans when it comes to questioning its validity. But for different reasons. His agenda appears to be largely about the saturated fat rich Paleo diet not meeting the Heart Foundation criteria, while other fatty and sugary foods do. Mine’s a little broader.

I’m neither a fan of high fat or high sugar. But that issue aside, the tick itself appears to be biased towards some out-dated research about the ideal diet.

Three reasons why I’m not a fan of the tick

Frozen chips, squishy white bread, chocolate based cereals and creamy pasta sources are amongst some of the foods that meets the Foundation’s tick criteria. That’s mostly because these products might have less fat or marginally more fibre than a competing brand.

Other than the implied assumption that chips and cream sauce are healthy meals in the absence of fresh produce – there’s an inference that an identical product (for example rolled oats, brown rice or quinoa) without the tick is less healthy. Another assumption that many members of the public make is that the Foundation assesses different foods and awards solely on inclusion criteria. In fact, companies need to apply for a ‘licence’ to market their foods with the Foundation tick. They then go through testing to see if they meet the criteria and this process can cost tens of thousands of dollars in some cases. Smaller companies may have nutritionally superior products but can’t afford the licence.

While the tick infers better choices in packaged and fast foods (even the Golden Arches got a tick for some of it’s meals), it doesn’t really educate people about nutrition. Perhaps Foundation funds could be better spent actually teaching the public how to cook healthy food from scratch. After all you won’t find the tick on a carrot or apple. What message does this give people about nutrition? Instead the presence of a tick encourages the consumption of mainly processed food and even worse, junk food. 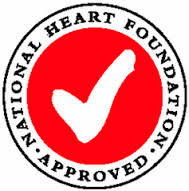 Is a tick better than nothing? What do you think?