Illness and the gentle art of surrender

As a child I was often unwell but only rarely, truly sick. I had frequent colds, coughs and tonsillitis, and at 7 managed to astound the doctor by contracting scarlet fever.

At high school, glandular fever slayed me for the best (or rather, worst) part of a year. Even though only 15, I sensed the virus was a game changer – I just didn’t know how.

Glandular fever taught me that when you’re ill, you can’t soldier on. After a few feverish weeks of bed rest, I slipped out one night to go to a party. Although home by 9pm, all the progress of recent weeks was lost and I ended up bedridden for the next few days.

During the 9 months that the virus did it’s worst, I began to understand the importance of convalescence. I was fortunate to have a great mentor. My mother was an old-school nurse who understood the importance of rest, clean sheets and gentle distraction. I learned that feeling bored was to be celebrated as a sign of getting one step better. With my slow return to school I began listening to my body. I missed a lot of socialising but managed to pass my exams well, despite being absent for a record number of days.

I took the absence of chronic debility as a sign of wellness, when actually I was far from being in good health.

I eventually recovered from the virus but it left a permanent mark on me. Anytime I over did things, skimped on sleep, had one drink too many or didn’t eat well – the old symptoms would return. The recurrent sore throat and raised glands became a barometer of self-care. Mostly I took heed of them. But even into my early 20s it wasn’t unusual to have a cold every month, or at least a day or two in bed wrestling a “lurgy”.

Nothing changed until, as a backpacker wintering in London, I found myself living in a houseful of naturopaths. They told me my yo-yoing symptoms weren’t normal and I began to realise that the glandular fever experience made me set the health bar too low. I took the absence of chronic debility as a sign of wellness, when actually I was far from being in good health.

The next time I came down with a cold, one of my housemates suggested fasting. The following few days were spent in bed with a high fever and other unpleasant symptoms. I couldn’t believe the volume of secretions that poured from my body! It was a monumental spring clean from the inside, out.

While I felt great for a couple of months after the initial fast, it wasn’t until I came to grips with a lifelong food allergy that the old symptoms significantly abated. But even then, the imprint of glandular fever was never truly eradicated. Decades on, I still can’t over do things without suffering the consequences. Even with a wonderful arsenal of herbs and nutrients, rest is still my number one, enduring medicine.

Surrender has become an act of bravery, in a culture that encourages us to fight beyond our limits…there is no shame or weakness in illness.

Recently, I realised I’d hit an amazing milestone – for the first time in my life, I’d not had a cold for at least a year. But of course the minute I declared the “achievement”, you guessed it; I succumbed to a monumental virus.

After spending the large part of ten days in bed, I’ve recalled those lost months in my teens submitting to glandular fever. There was no “fight” or “battle” involved as my mother taught me the art of total surrender. Looking back, this didn’t seem a choice – giving into the illness was my only option.

The idea of total capitulation as an adult with a business to run and a string of deadlines, is a challenge of epic proportion. I’m no longer a child with an endless life ahead of me. The clock is ticking and there’s too much to do to “waste time” lying in bed. But I tried channeling my inner teenager, who surprised me with her infinite patience.

Revisiting the gentle art of surrender, even for the champion of wellbeing, has been an interesting experience. While fortunate never to have been seriously ill – a week at home in a comfortable bed, cared for by an attentive partner, is one of those perverse gifts that life sometimes throws at you.

Next time your body tosses you a curve ball, I dare you to just give in. Surrender has become an act of bravery, in a culture that encourages us to fight beyond our limits. There is no shame or weakness in illness yet actually listening to our body and giving it what it needs, may just be more challenging than you expect. 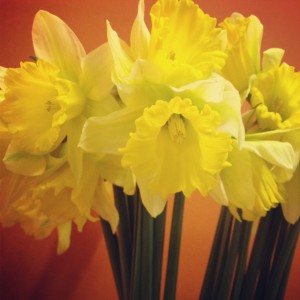 A few days after publishing this article in October 2013 I was diagnosed with an unrelated health issue – ovarian cancer. How prescient those words were!

Through surgery and treatment I did a great job of going with the flow, resting when I needed to and gently exercising when I could. But I’m so grateful that my headspace was so prophetically primed – to submit, yet remain actively involved in my healing journey.

I’ve always believed our body knows what it needs, it’s just a matter of learning to listen to it. Lean in – what is your body telling you?