Beyond the hashtag: are you really ok? 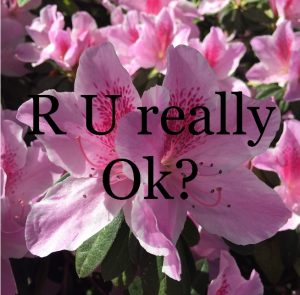 How often has someone asked you how you are, without stopping or looking you in the eye? Such a cursory greeting gives us a message that this is not a serious question and there’s not time or bandwidth for a negative response.

Today, is RUOK Day, an annual suicide awareness campaign. This year, everyone is urged to go beyond the hashtag, to set aside time to have a genuine conversation and be prepared to be present for anything that comes up.

When suicide is personal

Until a couple of years ago, the impact of suicide was always at least one step removed from me. When I was twenty, an older friend suffered the tragedy of his young teen son killing himself. I remember how inadequate I felt to even broach the subject at the time. I thought “giving him space” was the wise thing to do. That the last thing he needed was me bumbling my words or actions.

When a friend’s mum suicided, a few years later, on seeing him at a distance my first response was to run and “give him space”. But this time, a little older and beginning to become wiser, I stopped. I thought, “If it was my mum who’d died, what would I want? How would it feel to know friends were avoiding me?”*

That moment of mindfulness, replacing an automatic response with curiosity, is seared in my memory. Think about it. What would you want in the same situation? You don’t have to have an answer, you can’t solve their pain but you can be present.

Two years ago, suicide became more personal. I got a shocking call from a close friend in New Zealand to tell me our old friend had died out of the blue. There was so little information, on his Facebook page, someone had said they’d seen him in the morning and he’d seemed fine. My mind went to the obvious possible causes of sudden death, an aneurysm or heart attack perhaps. But most of all I just felt a hole in my heart, utterly bereft.

It wasn’t until many months later, his partner replied to my card and email, and told me it was suicide. That ripped the sadness wide open again, and I plummeted into shock and disbelief.

“I can’t exactly say why B left us. He suffered from depression but in a way that wasn’t fully obvious. Everything pointed to him getting caught in a very down moment rather than it being a planned action. I comfort myself with the thought that if he’d got through that afternoon in July he would be still with us, more or less happy. Irrespective, I miss him terribly.”
B’s partner of over thirty years

Thinking back to the year in the 1980’s that B and I had shared a house, did I see any glimmers of depression? I do remember an intensity of emotions, but mostly laughter. B’s laugh was like a fingerprint, so uniquely his, frequently tipping into hysteria which would set me off laughing ‘til I cried. At the time he killed himself, he was a leader in his professional niche, had a long term loving partner and so many friends. Everyone loved him!

Even the most popular and emotionally articulate person can have a bad day. Don’t assume anyone is invulnerable to rogue thoughts. As B’s partner reflected, someone can suffer from depression but in a way that isn’t obvious.

How to ask if someone’s ok?

The RUOK website is fill of resources on how to start the conversation:

“Got a niggling feeling that someone you know or care about it isn’t behaving as they normally would? Perhaps they seem out of sorts? More agitated or withdrawn? Or they’re just not themselves. Trust that gut instinct and act on it.

By starting a conversation and commenting on the changes you’ve noticed, you could help that family member, friend or workmate open up. If they say they are not ok, you can follow our conversation steps to show them they’re supported and help them find strategies to better manage the load. If they are ok, that person will know you’re someone who cares enough to ask.”

Am I OK today?

Remembering B brings me to tears. I still feel a cauldron of emotions about him taking his own life which range from disbelief to anger. But most of all I feel sad right now but I know this will pass. Very soon this feeling will be replaced by the physical pain of the exercise class I’m trying out this morning. It will refocus my mind and bring me into my body. There are social activities scattered through my day. I have people to talk to.

Sadness and suicidal thoughts are not the same, though unchecked one might lead to the other. It’s ok to feel sad, in fact, most of us need to become more comfortable with sadness. It’s knowing how to judge that point when sadness lingers too long and begins to suck the joy from life, learning to ask for help, to have a chat before the tipping point and certainly if it’s tipped.

The golden rule is always – if in doubt, talk. Ask for help.

Don’t know who to talk to? Call Lifeline 13 11 14 or Beyond Blue 1300 22 4636. You can also chat online to either of those services. They’ll never chastise you for not being sad or bad enough, or think you’re wasting their time. They’re there to listen, and share resources if you need them. 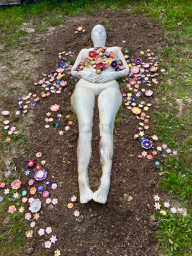 *Ironically when my mum did die, from more or less natural causes a couple of decades later, there were a couple of friends who avoided me or couldn’t mention her death. How did it make me feel? Like shit! I felt hurt, betrayed and astounded that even a very close friend could recede from my life due to her inability to cope with death. Friendships rarely come back from that degree of hurt. But on the upside, in times of grief (or cancer) there have been great friends and also unexpected previously not close friends who have gone above and beyond. Who seemed to know what I needed: a hug, a walk, a meal, a chat or just sit through a movie in the dark together. It’s never too late to say sorry.