Are you getting enough sleep?

Feel tired? A recent study found more than a quarter of Australian workers don’t get enough sleep and 42% of working mothers are chronically tired. Is under sleeping the biggest risk to your physical and emotional wellbeing?

Many Australians are suffering from an “unrecognised epidemic” of tiredness according to the study. Those working more than 45 hours a week or doing the double shift of full-time work and parenting are most likely to barter an hour or more of sleep to squeeze in some extra work or down time at night.

Under sleeping or “sleep restriction” is defined as getting less than seven hours of sleep a night. While some people may brag they need less, studies into the impact of under-sleeping on health and wellbeing reiterate the clinical relevance of this magic number.

Regularly sleeping less than seven hours a night can lead to:

It’s normal to feel overwhelmed with a sense that there’s not enough hours in the day to meet the demands of paid and domestic work, let alone have time for a partner, friends, family or self-care. For many people working over 45 hours a week or in paid employment plus doing the bulk of the parenting at home, it can seem like getting to bed later or up earlier in the morning is the only way to attempt to keep on top of everything.

Unfortunately the more under slept and tired we become, the less efficient we are at completing routine or complex tasks. It can be hard to gain perspective when you’re already doing the best you can.

8 ways to get more sleep 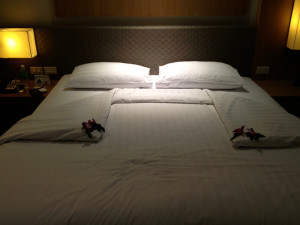 Under sleeping is only one sleep-related dysfunction. If you have trouble prioritising your sleep, experience other sleep disturbances or have ongoing fatigue when getting at least seven hours of shut-eye a night, book a wellbeing consultation.

Updated 14 February 2015: Want to see if you’re tiredness is negatively impacting your ability to work or react? Try this fun fatigue test (that might sound like a contradiction in terms but most people find it fascinating) from NSW Police.