Can you eat earwax?

Waxing lyrical on earwax, candles and other aural obsessions

Is it just me or are all humans just a bit obsessed with earwax?

Cerumen (the medical name for earwax) is made from secretions of the sebaceous and ceruminous glands in the ear. It’s acts as a natural waterproofing agent and collects dust, debris and microorganisms from entering and damaging the ear. The wax is also anti-bacterial and plays a role in preventing ear infections.

The ear is designed to be self-cleaning. Due to the combination of the small hairs in the outer ear and the mechanical action of chewing, wax should move outwards from the canal and fall out of your ear naturally.

When is earwax a problem?

Some people produce too much wax, or poke objects into the ear that compacts the wax, causing a blockage.

The symptoms of a wax blockage range from a feeling of fullness in the outer ear, to decreased hearing and pain. In children if this problem is untreated it may lead to problems talking and learning due to the impact on hearing.

1:10 children and 1:3 geriatrics have problems with blocked ears. But it’s still common in the adult population. About 1:20 adults (in the USA) consult their doctor with this issue.

A bulb syringe using body temperature water is usually the safest and effective way to do so. This simple procedure is often done by a doctor or nurse but a new study in the UK teaching patients to do this at home themselves, has been promising. If you frequently have blocked ears, take a look at the transcript of this recent ABC Health Report program with Dr Richard Coppin, the doctor who led the study. It might be helpful to print a copy and take it to your own GP to discuss with them, the next time you have the problem.

That’s not to say that syringing the ear is not without problem, even when performed by a trained professional, with damage to the tympanic membrane in the ear not uncommon. A NZ study of ACC claims for damages resulting from ear, nose and throat procedures found that irrigating (syringing) the ear accounted for 25% of complaints. However, in Dr Coppin’s home syringing study there were none. The authors noted that this might be because it’s easier to adjust the pressure when irrigating the ear yourself.

Can you prevent excess earwax?

The naturopathic approach to normalizing cerumen production comes back to what we eat. The problem can be caused by an essential fatty acid deficiency, so eating more deep-sea fish, raw nuts and seeds is a good place to start. It’s also important to cut out/reduce processed foods, especially flour and sugar and include a wide range of fresh vegetables and wholefoods. If you are prone to ear infections as well as blockage, then a dairy and sugar free diet can be useful.

In those with a chronic overproduction of earwax, a fish oil supplement is worth taking. If vegetarian, or allergic to fish, flax oil is an alternative but I’d recommend always taking vegetable oil supplements with a good multivitamin as, unlike the non-vegetarian forms, adequate co-nutrients are needed to create anti-inflammatory prostaglandins (the good guys).

Most importantly, don’t forget to chew. The mechanical jaw action is essential to encourage the wax to come out by itself. The more refined foods in the diet, the less we need to chew. Skip the chewing gum (full of artificial sweeteners and flavours) and grab a carrot instead.

Cotton buds and candles – things not to put in your ears 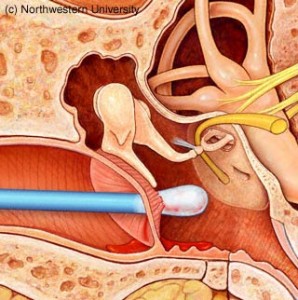 The basic rule is you shouldn’t poke anything into your ear, no matter how good it may feel to try to dig out the wax with a cotton bud (Q-tip), hairclip or matchstick. Putting a foreign object in your ear pushes the wax in the wrong direction, further impacting it. Hard objects also run the risk of you damaging your eardrum.

In the mid-90s a new product hit the market. Some bright spark thought if you put a lit, hollow candle in your ear it would create enough negative pressure to suck the wax out. If I had a $1 for every time I’ve been asked if I perform ear candling, I’d not exactly be rich but could at least buy myself a few swanky dinners. Despite it’s popularity in the natural therapies community I recommend you don’t use ear candles.

The evidence overwhelmingly demonstrates that ear candling is both ineffective and potentially dangerous. What’s more it doesn’t actually create pressure needed to do what it proposes. An early study in 1996 found that in the small sample of eight ears, the procedure failed to remove any actual wax. Furthermore the review found evidence of 21 reported injuries from using ear candles. A larger study 11 years later confirmed the findings. As for the “earwax” found in the candle after the procedure, on closer examination it turned out to be the candle wax.

Can you eat your own earwax?

People can and do. Perhaps it’s some kind of superfood that only future Prime Ministers know about?

But personally I can think of nicer things to eat than a lot of dead skin and natural oils.