When the weather cools down, I crave my favourite warming foods – porridge and soup.

But by mid-winter it can start to feel a bit boring, with a handful of recipes on rotation. Want to up your soup game? Here’s my favourite soups, one for every week of the season and beyond.

A soup for every week of winter

These soups are vegan, so they’re dairy-free and most are also gluten-free. But they’re adaptable if you want to add animal protein; just add a lamb shank to the barley and vegetable , an egg to the red lentil or chicken to the healing soup.

The recipes are simple and can all be made on a stove top, stock pot or Instapot (just follow manufacturers directions). 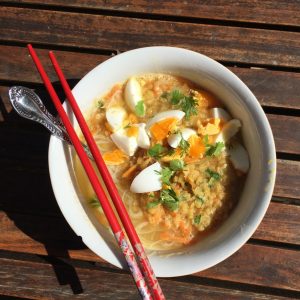 Red lentil soup with a twist – just add an egg