High on a windswept Wellington hilltop the view from Tarakena Bay is magnificent. But it wasn’t the reason I was there. We’d scaled the steep, twisting path with hundreds of steps to visit a war memorial with a difference. While the site commemorates one of the country’s most significant WWI campaigns, it lacks the usual jingoism associated with such monuments. Nowhere is it mentioned that over 2,000 New Zealanders died in the battle. Instead, the tall marble crescent atop the Wellington hill memorializes the man who commanded their downfall, defeating the ANZACs at Gallipoli.

When leading his Ottoman regiment to victory against the allies, Atatürk was our enemy. Later, as the revolutionary founder of the new secular state of Turkey, he became our friend. Inscribed on the memorial is his now famous 1934 tribute to the ANZACs killed at Gallipoli:

“Those heroes that shed their blood and lost their lives… you are now lying in the soil of a friendly country. Therefore rest in peace. There is no difference between the Johnnies and the Mehmets to us where they lie side by side here in this country of ours… You the mothers who sent their sons from far away countries wipe away your tears. Your sons are now lying in our bosom and are in peace. After having lost their lives on this land they have become our sons as well.”

There is something incredibly touching in his words. Even more so considering the Turks lost 86,692 of their own “Mehmets” in the battle, almost twice as many as the Allies “Johnnies”. While nothing can ever erase the personal grief that comes from bloodshed, acknowledging the role of our actions in the pain it can cause is immense. When we learn to love our enemy, magic happens. Forgiveness allows grief a chance to heal, grudges let go of and rifts in history darned. This act doesn’t rewrite the past, and nor should it, rather it creates the space to reflect on our wounds from a different angle.

“To be happy in the present, you have to give up hopes of a better past” Dr Robert Holden, on the importance of forgiveness in finding happiness.

You don’t need to scale a rocky peninsula to gain this perspective, though the site chosen for the memorial is based on its similar topography to the rocky outcrop at Gallipoli. Admiring the view as we slogged up the hill, it was hard not to reflect on what a similar journey would be like under artillery fire. Beneath a blue sky in peacetime it’s difficult to imagine the fear experienced by the men on either side. Nor that they’d ever believe that one day we’d be celebrating the compassion of these foes. 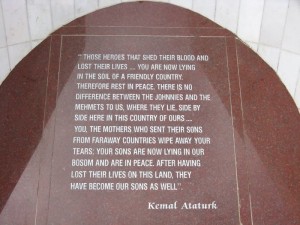 If nations can put their hatred aside, think of what our world would be like if we all learnt to do so.

Need some help with this challenge? Take a look at Leo Babauta’s article on loving our enemy.

The lockdown habits I want to keep