The low down on margarine 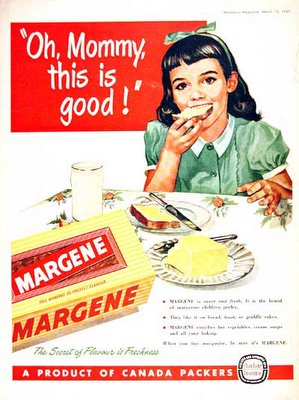 SINCE butter was fingered as the route to a heart attack in the 1970s, many health-conscious consumers have switched to margarine or, increasingly, one of the low-fat alternatives on the market.

Every year, supermarkets clear more shelf space for the new generation of low-fat spreads, each claiming to be better for you than the last. The idyllic 1950s view of butter, milk and eggs has long gone, with today’s shoppers more health conscious than ever before. But experts are warning that our fixation with butter and saturated fat as the new baddies is preventing us from seeing what’s wrong with many margarines and low-fat spreads on the market.

Take the latest breed of spreads that promise to lower levels of low-density lipoprotein, the so-called “bad” cholesterol or LDL, thereby cutting your risk of heart attack.

These spreads contain plant sterols, also known as phytosterols, which are naturally occurring parts of all plants and have been shown to lower blood cholesterol levels by an average of 10 per cent.

Plant sterols block the body’s ability to absorb cholesterol, reducing the level of it in the blood. But as with most good things, there is a hitch.
“While they certainly lower LDL cholesterol levels, they deplete the levels of beta carotene and other carotenoids in the body,” says nutritionist Rosemary Stanton.

Beta carotene is the major source of vitamin A in the western diet and there is growing evidence that carotenoids protect the eyes and have anti-cancer properties.

Australian research supervised by Peter Clifton at the CSIRO and supported by the margarine industry found that eating extra fruit and vegetables could overcome the adverse effects that these margarines had on carotenoid levels (Journal of Lipid Research 2004;45(8):1493-9).

“But as most Australians don’t eat enough of either (fruit and vegetables), the chances of them eating an extra serving are unlikely,” says Stanton. Another little-known fact is that phytosterol spreads are also not recommended for pregnant women or children. “This may be written in small print on the bottom of the tub, but how many hungry 11-year-old boys raiding the fridge are going to realise this?” she says.

It must also be remembered that there can be too much of a good thing. While ph
tosterols do help to reduce LDL cholesterol, Clifton’s research found that eating more than the recommended amount will have no extra effect.

“People should never think if a little bit is good then more is better, not with any margarine,” says Stanton.

Australians spent $463 million on butter, margarine and spreads in supermarkets in 2004, according to figures released by industry magazine Retail World.

So with more products on the market than ever before, which is the healthiest way to make your toast palatable?

“Very often we need neither of them on our bread, especially in sandwiches, but people seem to have a need to put this yellow grease on it,” she says. “In the Mediterranean, they eat twice as much bread as we do, usually without any spread, and this is reflected in their lower levels of coronary heart disease.”

The problem with butter lies in its saturated fat content, the type that raises blood cholesterol levels and heightens the risk of heart disease. “Butter has 60 per cent saturated fat whereas margarine has between 25 and 30 per cent,” says Stanton.

Evidence to support the case against butter can be found in a Finnish study which began in the 1970s (International Journal of Epidemiology 1991;20(3):651-62). With a diet high in saturates from full-cream milk and butter, the Finns had the highest incidence of coronary heart disease in the world. A drive by the Government to reduce this was successful, and through the adoption of better diet and anti-smoking initiatives, the level of coronary heart disease fell by 60 per cent in 20 years.

And in terms of calories, there’s bad news for those who have sacrificed that buttery taste for the sake of their waistline. “The public perception that margarine is less fattening than butter is wrong, as it has the same high calorie level and fat content as butter,” says Stanton. “The danger is that if people think margarine is better for them, they may eat more of it, and consequently consume more calories. With obesity being such a big problem in Australia, simply switching from butter to margarine will not help to reduce heart disease without other dietary and lifestyle changes.”

Unfortunately, the nasty fats waiting to clog up your arteries when you devour a hunk of bread with spread don’t end there.

“People think that an unsaturated margarine equals no unsaturated fat,” says Stanton. “If this was the case, the product would be an oil. To make a margarine you have to convert some of the unsaturated fat in the vegetable oils into a saturated fat or a trans-fatty acid to make it more solid.”

Trans-fats, as they are also known, are the evil cousin of saturated fat and have the worst effect on the body, raising levels of bad (LDL) cholesterol in the body and lowering levels of good HDL cholesterol.

“Fortunately the major manufacturers relented to medical pressure a few years ago and began to produce spreads with minimal levels of trans-fats,” says Stanton.

And Australia is in a far better situation than countries such as America when it comes to trans-fats in spreads, according to Jennie Brand-Miller, a professor of human nutrition at the University of Sydney and a margarine supporter.

“Most of our margarines have only a fraction of the trans-fat levels found in US products,” she says. “It must also be remembered that trans-fats are more of a problem in cakes and biscuits which have been made using harder, cheaper margarines that contain a lot of trans-fats.”

Despite the big producers falling into line, Stanton says she has noticed a reversion creeping back in to the Australian spread market recently.

“While the well-known brands have changed their ways, there are quite a few home-brand margarines with trans-fat levels as high as 7 per cent, when they should be less than 1 per cent. What is worrying is that I recently noticed a margarine with high levels of trans-fats which had a Heart Foundation tick on it, so shoppers must be vigilant.”

With all this in mind, what hope is there for the befuddled consumer in the margarine and spread minefield?

“People should opt for polyunsaturated and monounsaturated margarines which are low in saturated fat,” says Brand-Miller. “These help to reduce blood cholesterol levels and the incidence of cardiovascular disease.”

Polyunsaturated spreads are generally made from sunflower oil, whereas monounsaturated ones are derived from canola and olive oil. Both types are ‘good’ fats, found in foods such as avocados, nuts and fish oils and tend to consist of different proportions of polyunsaturated, monounsaturated and saturated fats, with the name on the label often stating which one is dominant.

So tedious as it may be, it seems that reading the all-important small print before you get to the checkout is the key to a healthy heart.

Comment
When you turn a liquid into a solid, something’s got to give. This has been one of the fundamental problems with the various generations of margarines. You begin with a fat and end with a mutated fat. If you want an oil on your bread, go for good quality olive oil straight from the bottle, not processed into a spread.

Another healthy option spread is tahini. Made from crushed sesame seeds, it is high in “good fats” and calcium. It is delicious topped with avocado, lemon juice and black pepper.

As the ‘Healthy Heart Tick” is a revenue raising exercise for the Heart Foundation, it is not the most accurate guideline for what may be actually a beneficial food for your body.

As for reading the small print…perhaps there should be guidelines at just how small a font such health warnings can be written in!